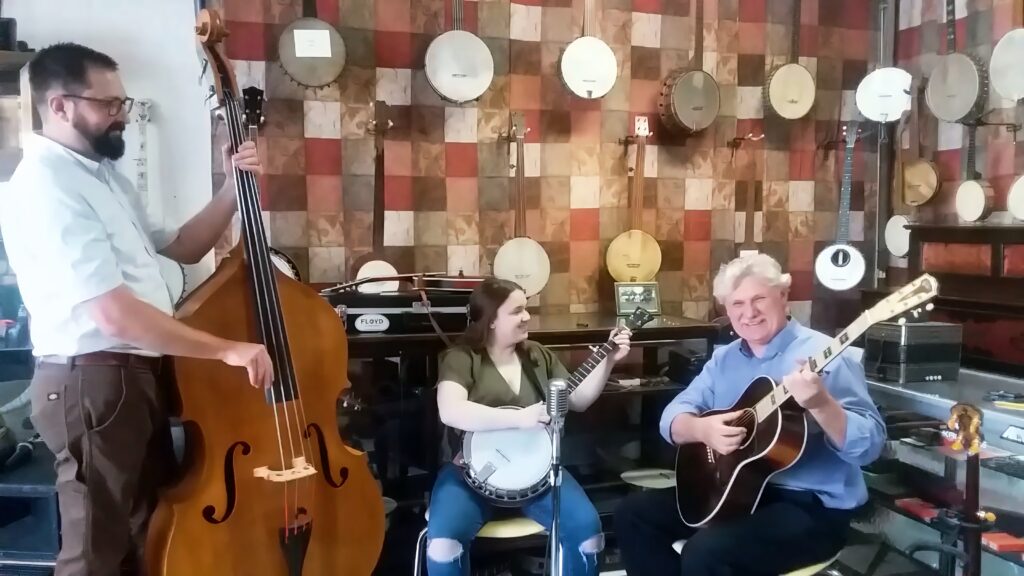 An Appalachian barber, musician, storyteller, presenter, music teacher, banjo historian, and radio host, Jim Lloyd has musical roots that extend through at least four generations of fiddlers, guitar players, dancers, and singers from the mountains of Virginia and West Virginia While accomplished on many instruments, he is known especially for his skills on guitar (finger-picking style) and banjo (claw-hammer and two-finger styles). He’ll be joined by Hunter Wilson and Sophia Pucket.

Sophia Puckett is a 17 year old, old-time musician from Galax Virginia.  She got her start at a local after school music program, and after 4 years of being a student, she was given a position there as the banjo instructor.  She says that “it’s been an honor share the music I love with other people.”  Through the program she was also able to meet Jim Lloyd and learn from him.  Jim has had a great influence on her playing and almost acts as a father, or grandfather figure for her, and many of his other students.  Sophia shared that playing this music with others allows her to have a whole other family outside of her own.  She is very thankful that the music has been passed down through the generations and made its way to her. Sophia says that she hopes that playing this music, she will be able to teach and share the music for many generations, just as Jim has.

Hunter Wilson began learning music at age 12 and sought out instruction from Jim Lloyd at age 13.  His mother’s side of the family was heavily involved with music. His mother, and his two aunts all played instruments.  Hunter and his brother were the first in several generations to take up stringed instruments.  Their instruction with Jim Lloyd continued for around 7 years.  Since then, Hunter has learned from other local players and played in a variety of groups and genres.  He cherishes the opportunity to carry on the musical traditions of his region.  He has introduced his son to the music and hopes to have him learn from the skilled teachers in the region and forge his own path.